I was doing some reading yesterday, and I came across a motivational idea in the book Simple Abundance: A Daybook of Comfort and Joy. WHAT IF I could give up the path of struggle and instead choose the path of joy?

Hmm. My mind immediately went to A) sounds kinda hokey B) How is that even possible? C) Well, that might be cool. I HAVE struggled a lot already in my life. D) Hell yeah! I’m doin’ it!

Why am I always waiting for the other shoe to drop? Thinking about the past, worrying about the future, not enjoying the present. Why does everything have to involve so much pain?

Maybe it doesn’t. Maybe I can choose. I was looking into this idea and I found this quote. I pretty much love it.

“There are two ways of approaching life. The first is coping and the second is challenging to change a situation. The situation is the same but the results are different. Coping is linked to the past and our past knowledge and experiences. It is a conservative attitude, limited, restricted, passive, defensive, dependent. There is no vision and no hope. This is not Buddhism. Buddhism is about change. Changing ourselves, society and humanity for good. The way to change is determination based on wisdom. Change is a projection towards the future. It is positive, creative, independent, attacking and seeking. It is an attitude of great hope and vision. Coping is the past projecting to the present. Changing is the present projecting to the future. We can choose. The difference between ordinary and great lives is up to us.” -Kazuo Fujii, Buddhist Leader

Instead of looking for the downside I can look for the opportunity in each situation. I can let go of drama. I don’t have to live my life simply reacting to things based upon my past. I can fully embrace the present. Life does not have to be a constant struggle.

I think it will require some work, but the seeds are planted. I choose joy… and I can totally dig it.

I am getting better at taking care of myself.

My baby steps are paying off in small but good ways. I am treating myself better than I have… maybe ever? It is shocking to me that I treated myself so shitty now that I have a bit of clarity through sobriety. I didn’t think I was at the time, but I was.

I was doing the best I could then. Luckily, I know better now.

I am only doing simple things to take care of myself, but when repeated daily they have the power to make me feel pretty damn good. Eating healthy and delicious food, getting exercise, looking nice everyday instead of wearing yoga pants, praying, writing, taking some time to myself, etc. …

It all adds up. Self-care is greater than the sum of its parts.

I am trying not to worry about doing it perfectly, either. It is okay to miss a day of exercise, for example, if that is what I need to do to take care of myself. It is NOT okay, however, to make excuses all the time because I am being lazy. Balance, balance, balance. What a nice word. I thought my word of 2014 was surrender, but maybe it is really balance. Maybe it is BOTH.

I am not allowed to talk in a mean way to myself, either. That is not allowed in my new balance-y life.

I just shut those negative thoughts right out of my head, and DO something instead.

I have been writing a daily gratitude journal- well, most days at least- for the past few weeks. I am already noticing a shift in my attitude because of it. I became sick with the flu this week, and felt nauseous in a way that I haven’t since my last hangover. I can’t believe it used to be normal for me to feel that way so much of the time. It is SO not normal. Today I am grateful to be sober because I am learning that I deserve to spend most of my life feeling good.

Early this morning I had a dance party in my living room with my son. I never would have done that when I was drinking because I usually felt like I had the flu on Saturday mornings, and it was all I could do to make coffee and supervise. I am grateful for Saturday morning dance parties. They are 1,000,000 times better than Friday night drinking parties.

Happy weekend to you all.

I needed this reminder today.

Sometimes it seems like the more work I do on myself, the more work that needs to be done. It is a never-ending process. When I take a step back and look at the big picture, however, I can see that my life is gradually getting better and better. I have taken responsibility for my life and happiness in a totally new way by getting sober.

I look at this quote as another reminder from the universe to be gentle on myself, even when I make mistakes. I haven’t been close to drinking, but I am so far from perfect sometimes…wow. I can be harsh, critical, grouchy, not present with those I love, etc. I am trying to be better at all of those things, and that effort matters. It means that I care about the impact I am having on the world around me.

So…if you are reading this, you are trying too. Be gentle on yourself.

My baby celebrated his first birthday this weekend, and it made me reflect on how my life would be different if I had not quit the booze. First of all, I probably would have thrown him a party this weekend. I would have felt obligated in some silly way, because I was less secure when I was drinking and I worried more about what people thought about me. You’re SUPPOSED to throw a party for your child EVERY YEAR, right? Or else you’re a bad parent? Um, no.

So … my one year-old would have had a party, filled with mainly grown-ups, hanging out. In most social circles one year-olds don’t have a bunch of friends to invite to parties yet. His party probably would have been a good time, but it wouldn’t have been as much about HIM. His wants and needs … not ours.

In addition, there likely would have been some drinking involved at this shindig. We would have justified it to ourselves by saying that we ‘deserved’ to celebrate. Heck, we have been parents for a whole year! That IS cause to celebrate! Why do we need to drink alcohol to celebrate, though? Especially when the MAIN event … the person we are really celebrating … has no use for alcohol, parties, and large groups of people at this point in his life. He just wants to hang with the P’s, play with his toys, go for walks, take baths, chase the cats, jump on the bed … you get the idea.

Instead, we spent the whole weekend doing things that he likes to do. We saw a few friends, but we didn’t overwhelm him with a large party. We took a couple of nice walks, opened a present every few hours, made banana cupcakes that he smashed and ate, sang songs, read books, played with toys, took naps, etc. It was practically the same as a normal day except BETTER! He was so happy to be with his parents the whole weekend, and we were able to give him 100% of our attention. I didn’t think about drinking hardly at all, except that I was SO happy to be sober. It was perfect. A good introduction to birthdays for him, and no stress for me.

I can’t say FOR SURE how things would have gone down had I still been drinking, but I don’t think it would have been quite as nice. Once again, I feel that being sober is a gift you give to yourself and to the important people in your life. It’s always a good reminder. 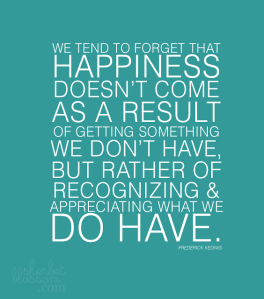 I like this quote. It is a good reminder to practice gratitude every single day. Right now I am grateful for 78 days sober, a long afternoon baby nap, the fact that it is Friday, and the beautiful leaves changing colors outside. What are you grateful for today?

Today is Day 59 for me. I am excited to hit 60 tomorrow and be almost 2/3 of the way finished with my 100 Day Challenge. Happy Sunday!

**edited because I am horrible at basic arithmetic, apparently. Ha!